Eleventh day of our trip to Japan in spring 2015, my husband and I went to a visit Himeji and Osaka. Early in the morning we left our hotel in Kyoto and boarded the fast shikansen train to Himeji.

The reason we traveled to Himeji was the castle Himeji-jo – one of twelve original Japanese castles that hasn’t been damaged or destroyed in the wars or in natural disasters. It is actually pretty remarkable that the castle is still standing. During World War II the Himeji town was completely destroyed by the allies, but the castle remained intact. Luckily the bomb that landed on the roof failed to detonate. As it is still in its original shape and because is considered to be the finest example of the classic Japanese feudal period architecture it has been inscribed to UNESCO World Heritage list.

Instantly after we exit the Himeji train station we saw the Himeji castle dominating the area from atop of the hill. Majestic and beautiful. While looking it, I understand where its nickname Shirasagi-jo – “white heron castle” comes from. With a bit of imagination its roof gables really resembled a white bird taking off in flight.

To get to the castle, we followed a long straight road. With every step, the castle grew bigger and more impressive. Because it underwent a major renovation just before our visit (completed in March 2015), it shone in its bright white colour. It was impressive to see it in all its glory, but on the other hand, the renovation took away some of its authenticity – it didn’t feel as ancient as its truly is.

When we arrived to the castle entrance, we bought out tickets and enter the castle grounds. Before we were allowed to enter the main building, we had to take our shoes off. Carrying shoes in the plastic bags provided by the kind castle staff, we explored the main building. While the exterior of the Himeji castle is truly remarkable, neither I nor my husband were impressed by the interior. Its huge rooms were very modest. They looked empty as only few objects from the castle’s long history were exhibited and only few explanatory panels were provided. The most interesting were definitely the panoramic views from different floors of the main building. Despite slight disappointment with the interior, we enjoyed our visit of Himeji castle. After all, it was our first visit of an ancient Japanese castle! 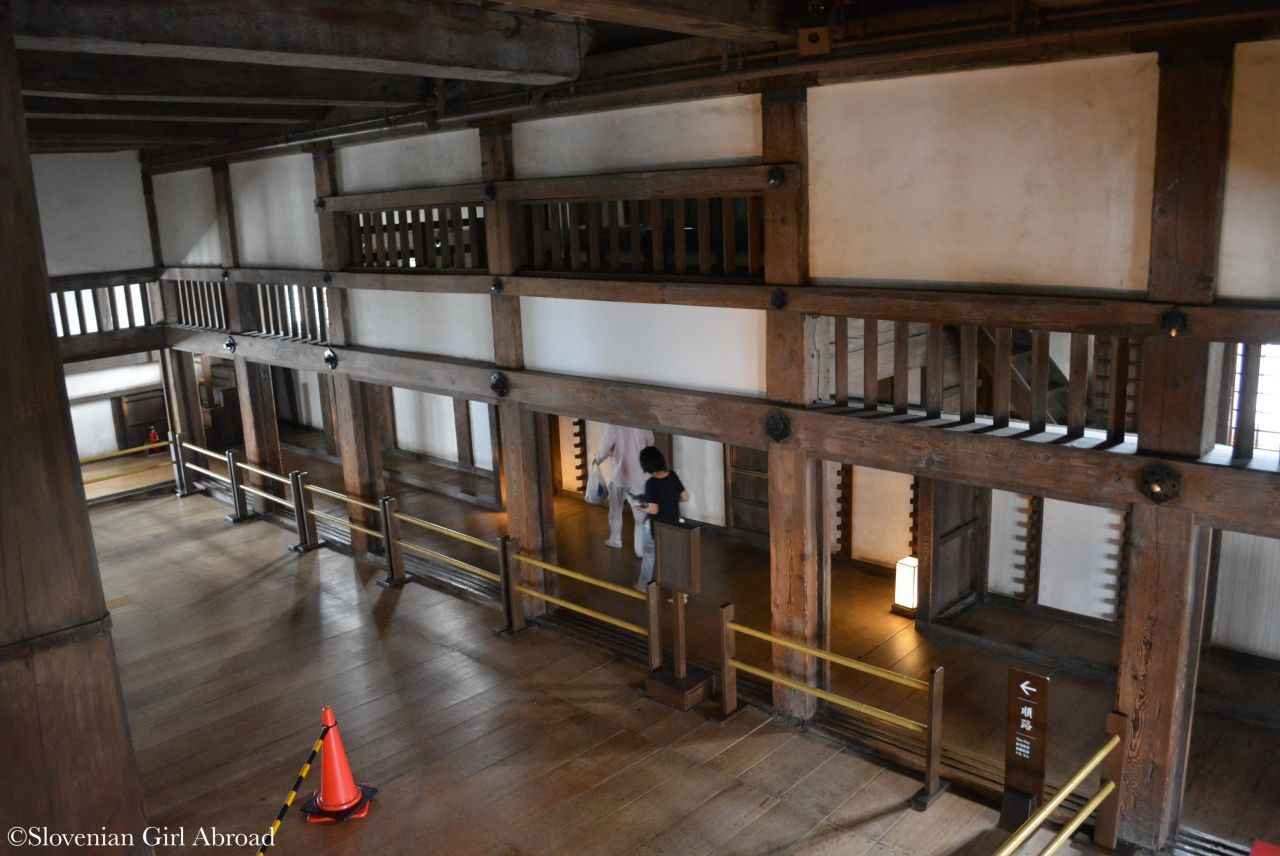 Interior of the castle

After our visit of the Himeji castle, we went to see the nearby Kokoen Garden. After we’ve read in our guidebook this area used to be feudal lord’s residence, we expected something different. My husband was a bit disappointed when he discovered there is no emphasis on the samurai heritage of the place, but I wasn’t. The gardens were just too beautiful. They were definitely one of the most beautiful gardens we’ve seen in Japan.

After our tour of the Himeji castle and the Kokoen gardens, we walked back to the Himeji train station where we’ve boarded the train to Osaka. 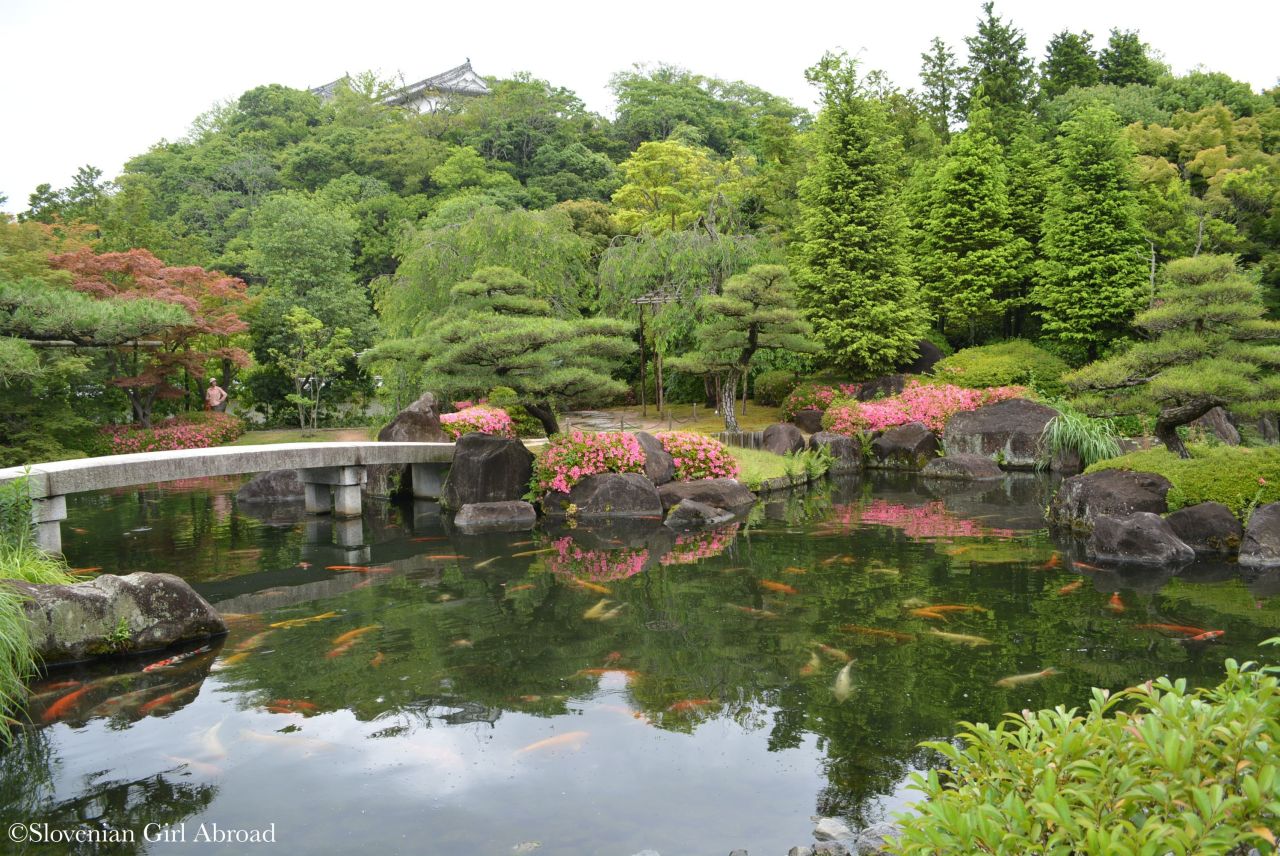 When we arrived to Osaka it was already lunch time. We craved for some western food. After some online research we found an Australian pizzeria. We went there and had delicious pizza. With our bellies full, we walked to the nearby Osaka Aquarium Kaiyukan where we admired the marine life. 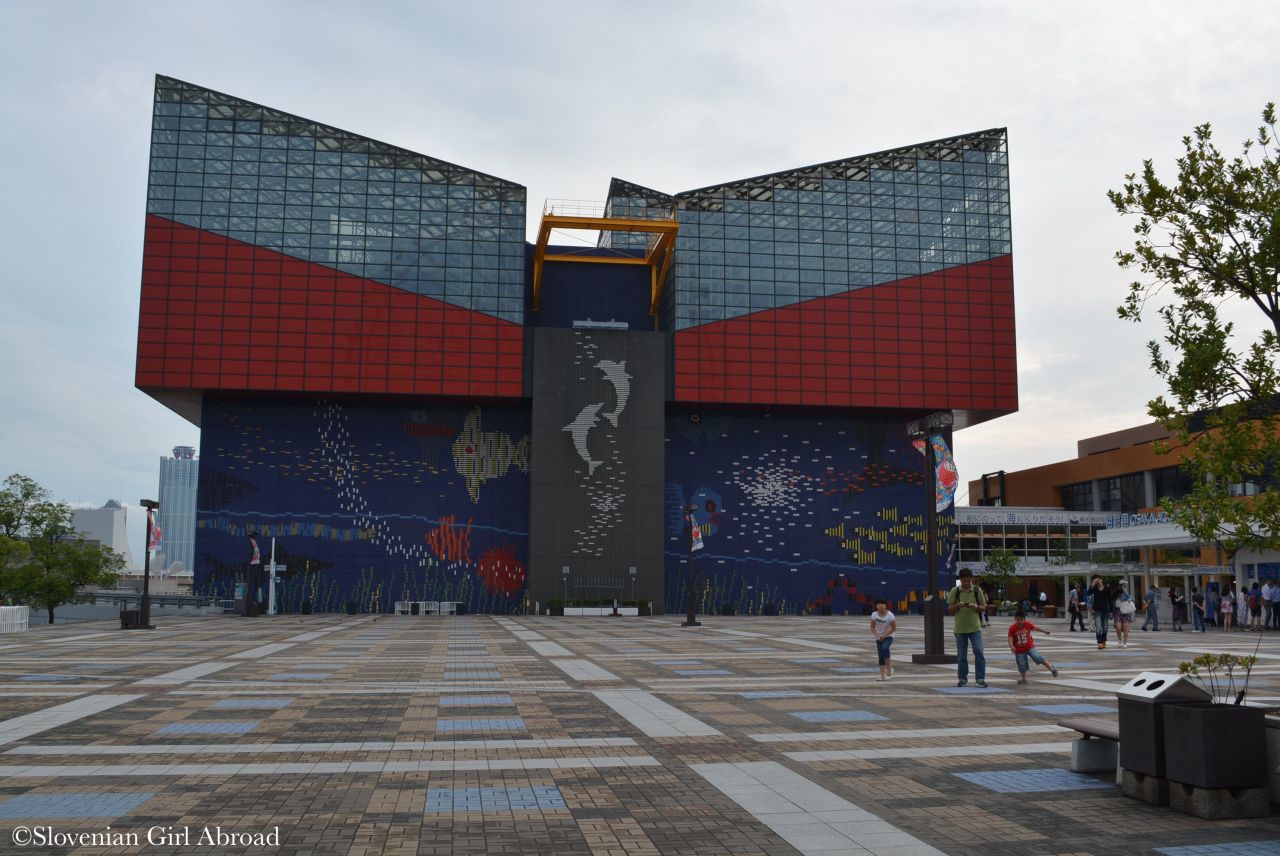 The aquarium was amazing. It introduces the marine life inhabiting the Pacific Rim in well organised and interesting way. We started our tour at the surface of one of the 15 tanks that are displaying the animals from the specific region of the Pacific Rim. We slowly spiralled down the visitors trail floor by floor, observing the animals living in the tanks from different perspectives.

Animals looked well kept and we were able to learn many interesting facts about the them from informative panels in English placed all around the area. There were not many visitors in the aquarium and the atmosphere was peaceful and quiet. Amazing. 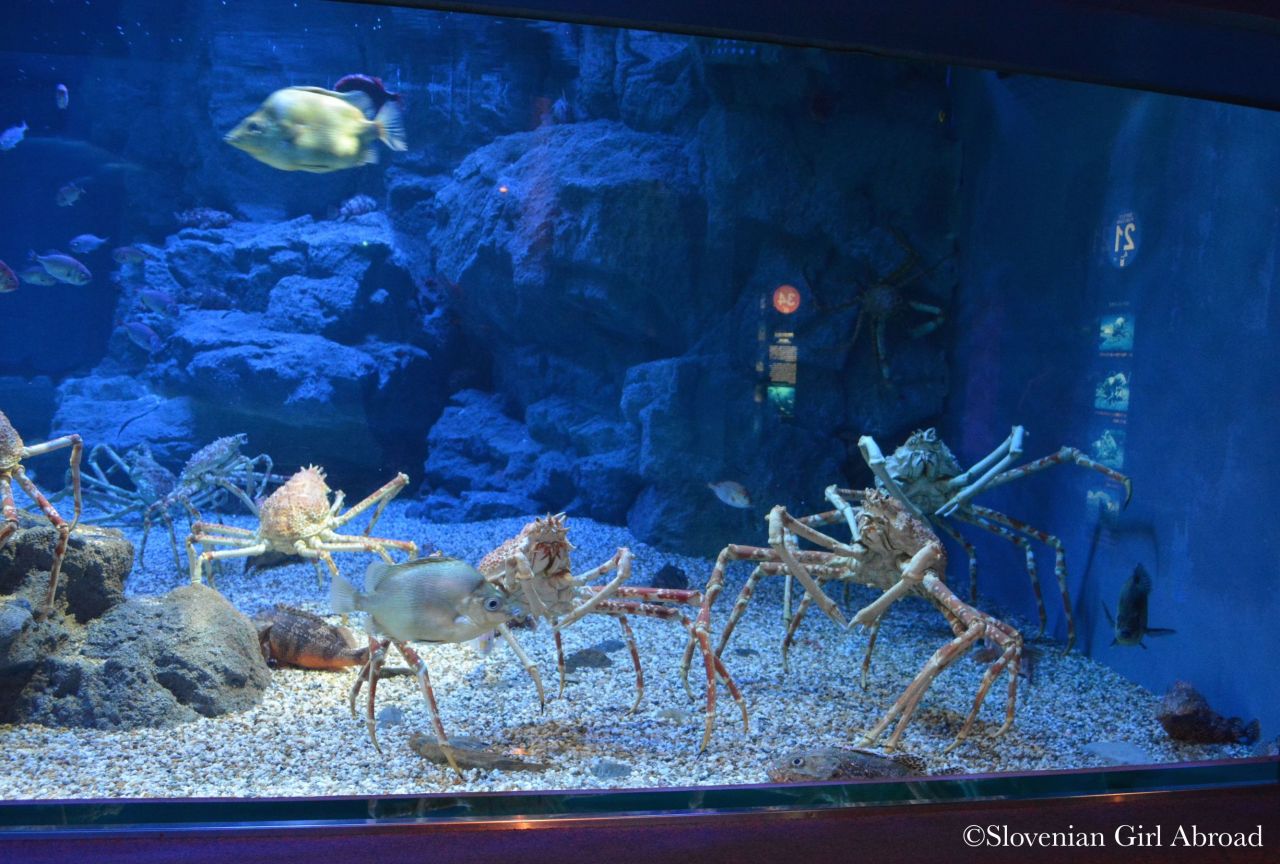 The highlight of our visit was the tank at the very end of the visitors trail where we were allowed to pet sharks and stingrays. Of course, there are some rules we needed to obey in order not to cause stress for the animals. We carefully followed them while petting the animals. The sharks’ skin felt harsh, while stingrays’ reminded me of a jelly. 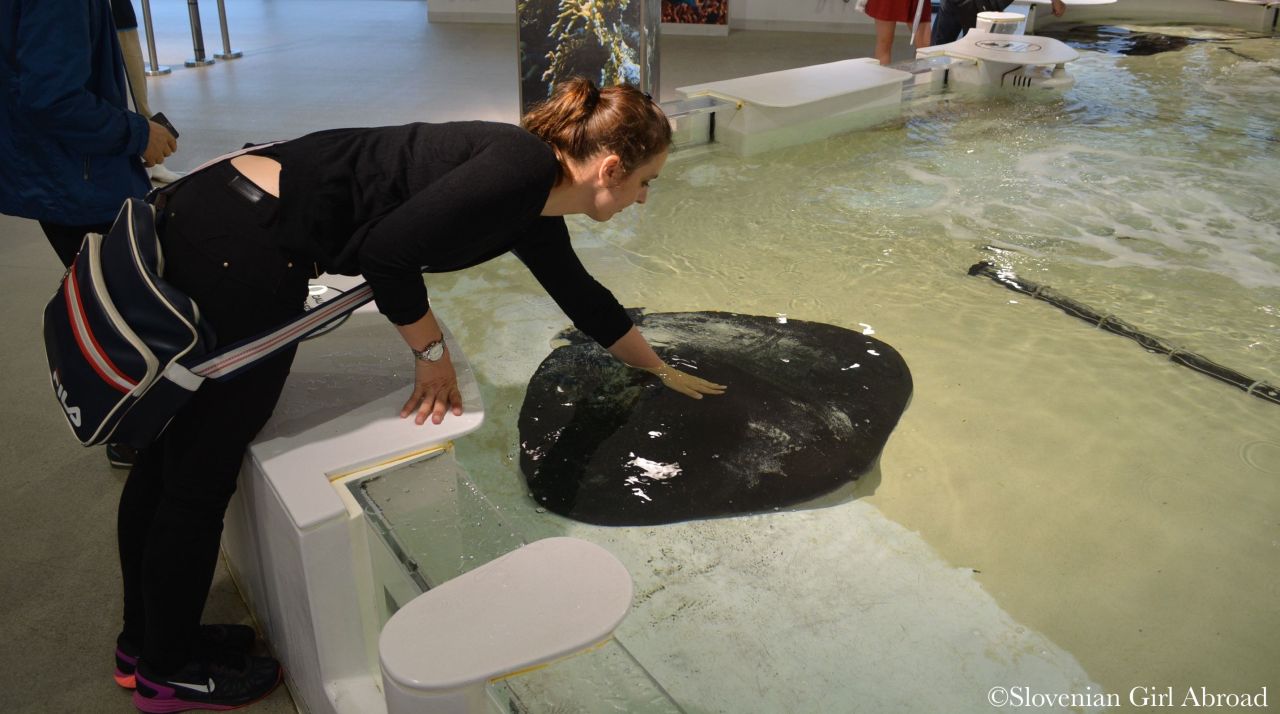 Before we left the aquarium we’ve spent some time at its amazing gift shop. We bought some cute souvenirs for us and our families and then we took the metro to one of Osaka’s two major city centres – to Minami. Located around Namba Station, is the city’s most famous entertainment district. The area was full of people, full of neon signs and sounds. Very different than the peaceful area by the Osaka Aquarium. 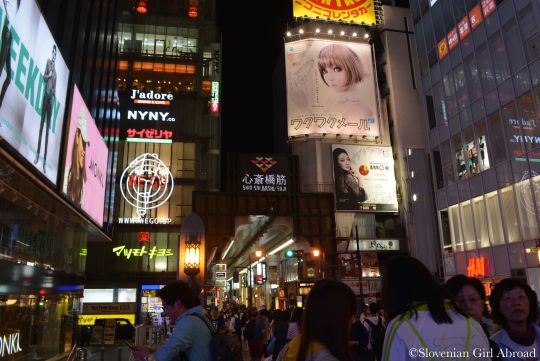 We’ve strolled through the streets of Minami area. We stopped at Dōtonbori where we saw the famous Glico running man sign and Kani Doraku crab sign. We did some shopping at Shinsaibashi Shopping Arcade and walked the streets of Amerikamura district.

The time flies when you’re having fun and soon it was time to return to our hotel in Kyoto. After some struggle deciphering Osaka public transport network, we managed to get back to Kyoto where we’ve spent another night.