Our flight from Basel Airport to Iceland was scheduled at 7am, what means we had to leave our home in Lucerne in the middle of the night. We completed packing late in the evening and instead of going to bed, we had to watch the latest episode of Game of Thrones to find out whether Jon Snow lives or not. Waking up after just few hours of sleep was definitely painful, but at least we got to know the Jon Snow’s faith. The expectations of another amazing trip kept us going. We’ve managed to sleep through most of the flight. After we’ve landed at Keflavik airport I was surprisingly well rested. At the airport we’ve picked our rental car and hit the road towards Vík – the tiny town at the Iceland’s south coast we’ve chosen as our basis for the next two nights. We’d followed the Ring Road (Route 1) – a national road that runs around the island and connects most of the inhabited parts of the country. In the first hour of our drive, we’ve experienced everything what unpredictable Icelandic weather has to offer: sun, snow, heavy rain and even hail. Driving the Ring Road – Seljalandsfoss in the distance

Southern part of the Ring Road passes many attractions. We stopped at some of them. First one was a lovely waterfall located between Selfoss and Skógafos: Seljalandsfoss waterfall. It is located just a stone’s throw away from the Ring Road. Because it is visible far from the distance, it’s hard to miss. Seljalandsfoss waterfall sources from the river Seljalandsa that falls over 65 meters high old sea cliff. One of the interesting features of this waterfall is the fact that visitors can walk behind it into a small cave. Despite you can get wet and muddy, it is nice and interesting experience to walk this trail and see the waterfall from different angles. Next stop was Skógafoss waterfall, just a few minutes ride away from Seljalandsfoss. Skógafoss is situated on the Skógá River and is considered to be one of the most beautiful waterfalls in Iceland. With a width of 15 meters and drop of 60 meters it is also one of the biggest waterfalls in the country. 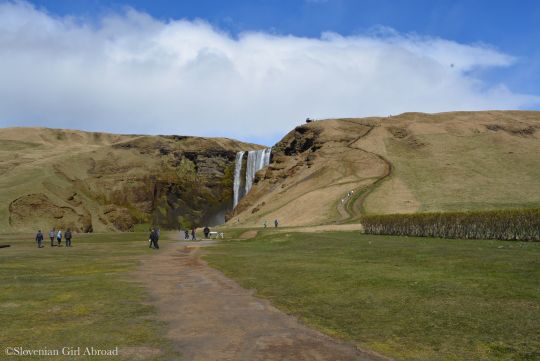 By the time we arrived to Sógafoss, the sun came out and the wind stopped blowing. We left our car in the car park and walked to the Sógafoss waterfall. Sun rays and the mist produced by the water , allowed us to witness stunningly beautiful scene of two rainbows. Seeing Sógafoss in all its magnificence, was definitely one of the highlights of my trip to Iceland. We also walked the official path to the top of the cliff. There, at the small viewing platform where we were rewarded with not only with top down views of Skógafoss but also with the panoramic view towards the Atlantic Ocean.

View from the viewing platform

From Skógafoss, we continued our journey to our hotel at the outskirts of Vík. We’ve checked-in, refresh ourselves and then we headed to Vík for late lunch. Our first encounter with Icelandic cuisine was surprisingly good. My husband and I both ordered fish and were pleasantly surprised how delicious it was. Expensive, but tasty. Vík í Mýrdal is the southernmost village in Iceland

After lunch, we walked to the Vík’s black-sand beach Vikurfjara to see the basalt sea stacks Reynisdrangar. The highest of these lava stacks is 66 meters high and is an impressive feature that can be seen far from the distance. Legend has it that those pillars are three trolls, caught out too late and were frozen by the early morning sunlight. 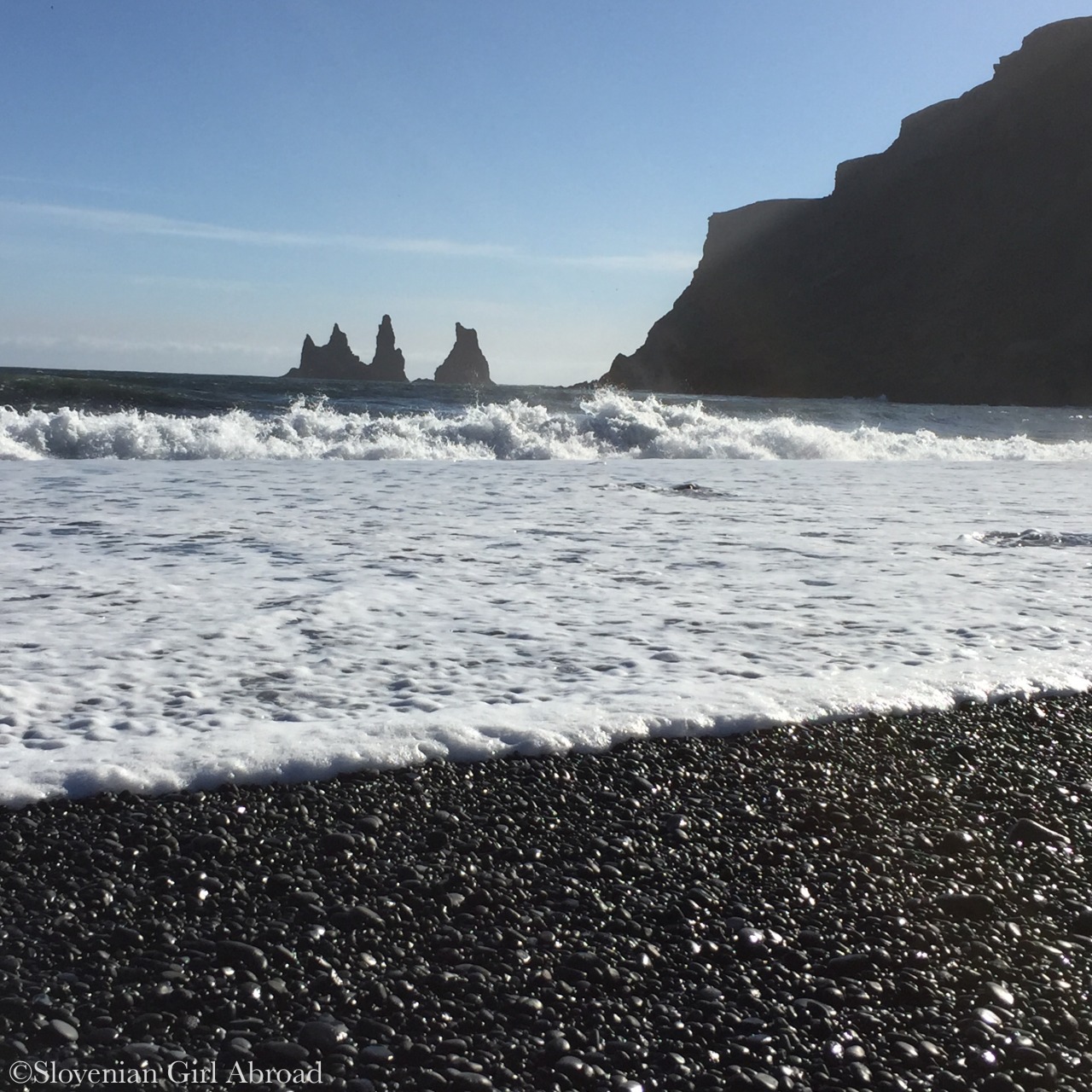 After a stroll at the windy beach we drove to the other side of Reynisfjall summit, to beach Reynisfjara where we admired Reynisdrangar from different perspective. 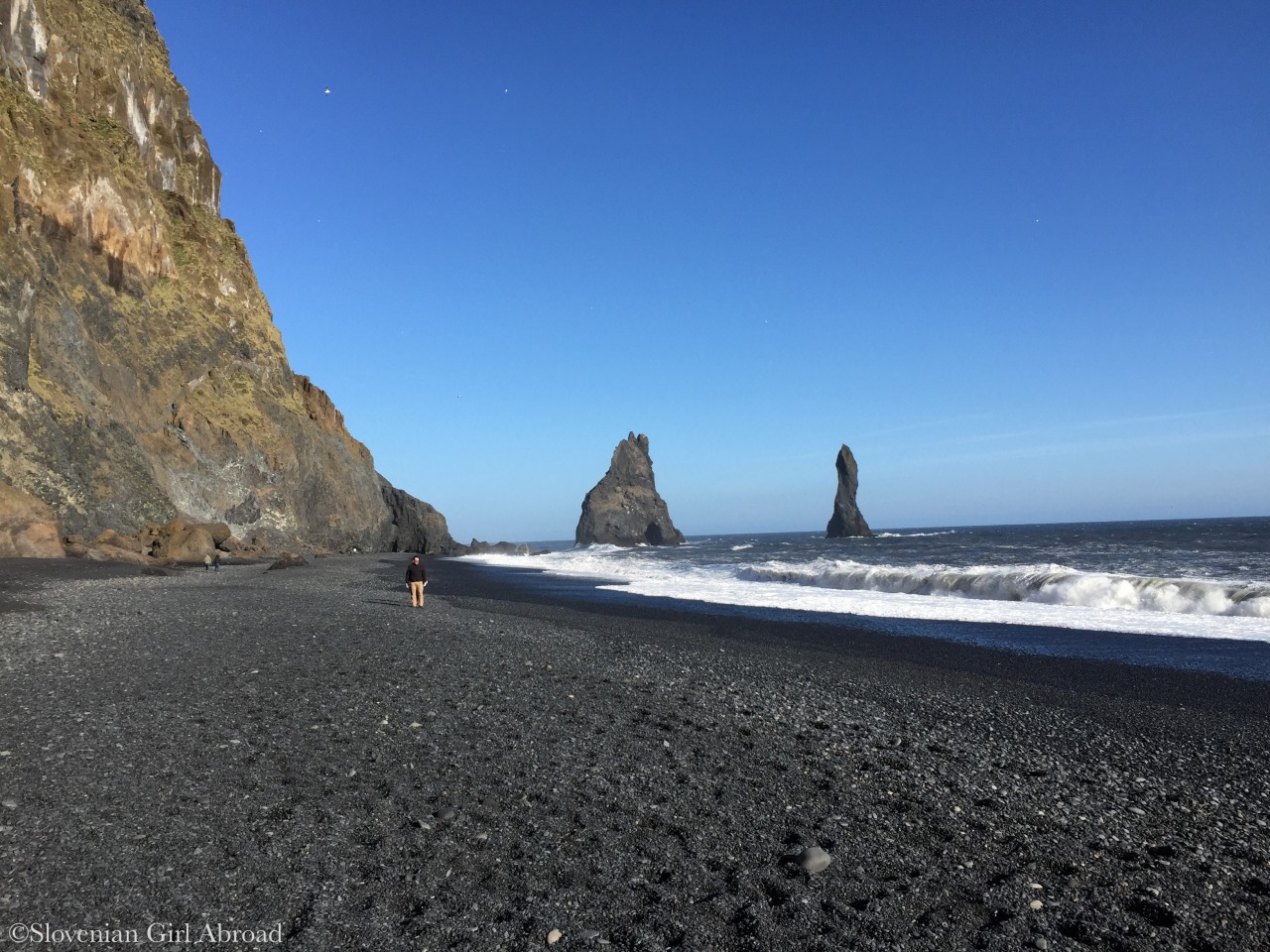 Reynisdrangar as cacn be seen from Reynisfjara

Another fascinating feature of Reynisfjara are columns rising out of the black sand like ramparts, and gloomy Hálsanefshellir cave, in which it’s said that a monster once lived for several hundred years. At this place you can easily believe some of the myths ancient people invented to explain the existance of those impressive works of nature. After a walk, we’ve returned back to our hotel where we’ve spent the rest of the evening soaking in the geothermal hot tub with the distant view to Reynisdrangar.